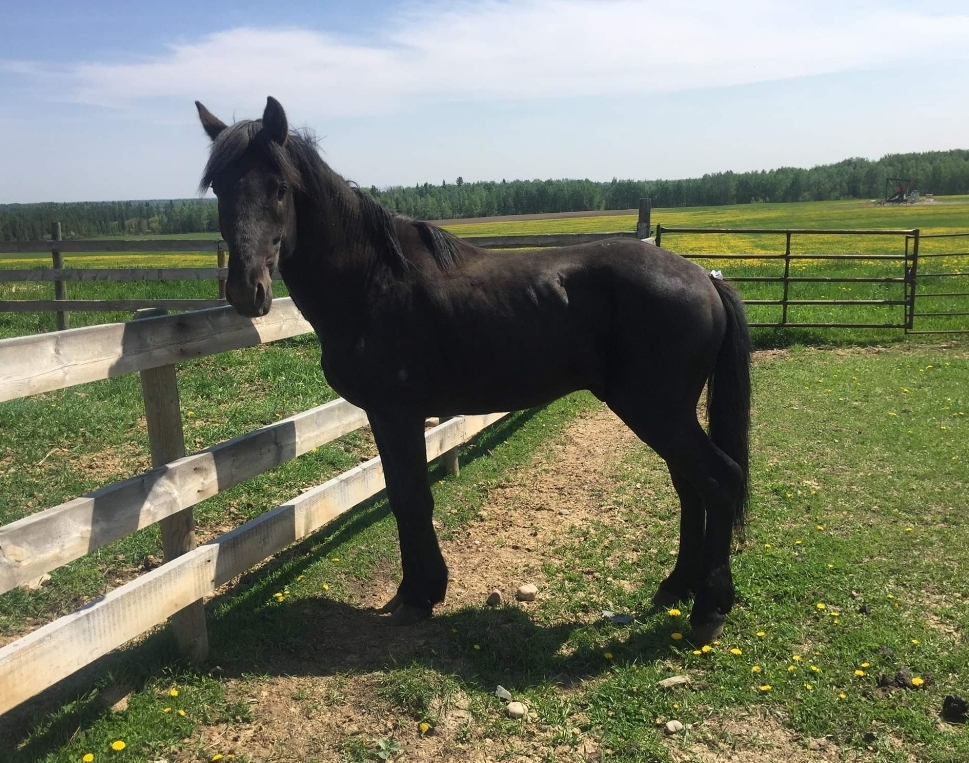 Derringer is a 3 year old, approximately 16hh, gelding who came to the rescue (as a stud) from the Rimbey Auction Mart. He has an unknown history and was underweight and unhandled on his arrival.

Once brought to his foster home, he was given a few days to relax and acclimatize to his new surroundings. In true Canadian horse fashion he quickly began to show how friendly he wants to be. Derringer greets his foster family by trotting to the gate and nickering every time they drive in the yard or are outside doing chores. He happily follows people throughout the pasture and is respectfully inquisitive.

Derringer was gelded on July 5, 2019; he was also vaccinated and had his teeth done. It was during this check-up we discovered a missing front tooth, likely from being kicked in the face. It does not seem to impact him in any way. He also had a halter put on, for the first time, and halter training has begun. He is not completely comfortable with being touched and caught, but with his puppy dog personality this won’t take long to overcome.

Derringer was made available for adoption, to an experienced home only. As an untouched 3 year old, he had never learned any of the basics nor had an opportunity to truly experience the kindness of humans. He was a blank slate but with huge potential . . . with the right person. We were lucky to find that right person in November 2019. After several discussions, including long conversations with Derringer's foster mum, Skye went to visit with the hopes all would go well and Derringer would go home with her.

Sensing something "was up" Derringer was not on his best behaviour but we all decided it was a good thing. It gave Skye an idea of what to expect on a bad day. Being intensely curious, and eager to please, Derringer quickly settled and that was all it took. Skye was in love, everyone decided this was a good fit, and off they went. We wish Skye and Derringer all the best for an amazing future.